Racism: The Elusive Quest For Justice And The Inhumanity of Police Brutality in USA, published in MEDIUM.COM

This article is titled; Racism: The Elusive Quest For Justice And The Inhumanity of Police Brutality in the USA, published in MEDIUM.COM

Because of some of the ‘radical’ proposals for possible solutions for the tough issue of 'Race', I was not quite sure whether the curators at Medium.com would select the article and recommend it to their readers, but, to my pleasant surprise, they did.

I think the proposed solutions in the article for the complex issues of Race, Racism, and Justice would be major additions to those already in place and those being considered.

RETHINKING THE PATHWAY FOR THE EMERGENCE OF THE NATIONS OF SUB-SAHARAN AFRICA.

Why open-ended Foreign Aid is not the solution to the huge problems facing the nations of Sub-saharan Africa.

No amount of foreign Aid or "benevolence" by China or India will reverse Africa's poverty. The thinking process and the hard work required to lift Africa from the bottom of "the ladder of mankind" must come from Africans.

WHY THE USA AND THE DEVELOPED WORLD NEED A ROBUST, BUT DIFFERENT AFRICAN POLICY

For Africa to emerge from the basement of the "HOUSE OF HUMANITY", two things must occur.
1. African leaders must undergo purification of their hearts and love their fellow citizens as themselves. Africans, and especially the leaders must undergo a complete transformation of their mindset and believe that what other segments of the human race can do, they also can do.
2. The donors including foreign governments must stop "building" Africa. This misguided benevolence is destructive and inimical to the long term progress of Africa. Their policies should focus on helping Africans to help themselves and build their own nations.

The African Conundrum: Why Change In Sub-Saharan Africa Must Come From Within

Radio Interview given by President of PACAW, Inc in October 2019 to radio station in Orlando Florida, USA.

Radio Interview discussing the ideas in the book: RESCUE THYSELF: Change In Sub-Saharan Africa Must Come From Within.
The interview affirms that the thinking process for the solution to Africa's monumental problems must originate from Africans. Several ingredients including knowledge, and in particular, universal basic education are keys to the resuscitation of these nations.

This is out Test Article (This is the Title)

(This is the Description)

Below is the message from the founder of the NGO in Nigeria --- THE OLISE-OMOLU FOUNDATION --- that we (PAN AFRICA CHILDREN ADVOCACY WATCH) collaborated with from September to October 2018 in Nigeria.

This activity was Part 1 of the Tripartite mission of Dr. S. Adetokunboh Ayeni, President, PACAW, Inc. during the trip.

VISIT OF DR. S. A. AYENI, PRESIDENT/FOUNDER OF PAN AFRICA CHILDREN ADVOCACY WATCH, AN NGO BASED IN MARYLAND, USA TO OUR FOUNDATION’S PILOT PROJECTS AT EZIONUM, DELTA STATE

I refer to the above. You would recall that I earlier informed you of this visit. The visit has come and gone leaving in its trail profound impact on child education at Ezionum.   Against all dissuasions from his loved ones, Dr. Ayeni came on this visit.  By this visit, he walked the talk.  He drove the point home that his love for the emancipation of the children of Africa ensnared by illiteracy is total.  He made it plain that his desire for the well being of the coming generation is not an affectation but is as natural as breathing.  Dr Ayeni is the author of a soul-searching book‘RESCUE THYSELF’ which I am making available to you very soon.

A  recap. This outing at Ezionum was bankrolled by PAN AFRICA CHILDREN ADVOCACY WATCH (PACAW), an NGO based in Maryland, USA. Its President/Founder,  Dr. S. A. Ayeni, a Nigerian who is a Neuro  Surgeon has been in the US since 1975. He left the comfort of his home in God’s own country to malarial Ezionum.   We have been exchanging emails and phone calls these five years and more.  But we had not set eyes on each other until about 8 pm on 17th September 2018 at Port Harcourt International airport, where I have gone to pick him.  It was his very first visit to that part of Nigeria.

Few days before our maiden meeting, he had transferred over  N1.2 million to our Foundation to make available the following critical school supplies to the three schools at Ezionum – five thousand exercise books,  desks/chairs to sit eighty children, nine footballs and twenty-eight football jerseys. The trust that informed the ferrying of such amount of money to someone you did not know from Adam, to use the cliché, stands out.  Remember, I have stated above that it was only on 17th September 2018 that we met in person for the first time.

For two weeks running,  Dr. S A Ayeni and I traversed Delta State.  He saw at first hand the squalid conditions of our schools (some scenes almost drew his tears) like the Physics Lab at Ezionum secondary school.   He was brutally frank when he said that the difference between the Physics Lab and a dustbin is just the difference between six and half a dozen.  He promised that as soon as his foundation has enough funds, he will address the lack of a state of the art science laboratory.   One question he kept on asking me throughout the duration of our visit was:  “SUNDAY, IF YOU HAD NOT INTERVENED, WHAT WOULD HAVE BEEN THE FATE OF THESE SCHOOLS.”  Let me state clearly that in these five years that I have been treading this path of encouraging some of the out-of-school children to ‘return’ to school  (with your very generous supports), no outing has been as impactful on Ezionum community as this.

Pan Africa Children Advocacy Watch (PACAW) through its President/Founder, Dr. Ayeni, rekindled the interest of the out-of-school children at Ezionum in education; drummed the idea that education is it into the ears of those parents who were previously not keen on sending their wards to school. This objective was hugely achieved if we are to go by the number of children that resumed in the second week of resumption this just commenced school year.

We were told that in the past,  the King had to instruct the town crier to alert members of the community that schools have re-opened otherwise there will be no children to teach. But this time, because of the availability of amenities that make schooling at that level tick, no one needed to be reminded to be at school.  Darius Lyman has written that a gift in season is double favour to the needy.  Could you please join me in saying Well Done to Dr. Ayeni and PAN AFRICA CHILDREN ADVOCACY WATCH (PACAW).

And as if the great things he did at Ezionum were not enough, Dr. Ayeni still donated eighty-five copies of a  very important Scientific Journal - NATURE -  to the Delta State University, Abraka. Before he made the donation of the Journals, Dr. Ayeni had a day before went around the University Library and discovered that the few copies of the Journal there were 1991 editions.  He donated 2016 and 2017 editions of the journal.  The Librarian Professor S. O. Uwaifo was so elated when we kept the appointment of presenting the Journals that he had to interrupt the meeting his Vice-Chancellor, Professor Victor  Peretomode was having with a phone call to alert him of the generous donation by Dr. Ayeni of the highly revered journal.  The VC was equally happy and expressed his gratitude to Dr. Ayeni for the donation of the very useful journal.

On another subject (but related to child education). November 20th, 2018 is Universal Children’s Day marked every November 20th by the United Nations.  It is the date in 1959 when the UN General Assembly adopted the Declaration of the Rights of the Child and on the same day in 1989, the UN General Assembly adopted the Convention on the “Rights of the Child.”  To revive the Reading Culture, and above all, to introduce the children to reading, OLISE OMOLU FOUNDATION is organizing a ‘READING COMPETITION’ for fifteen primary schools in the local government area where our pilot projects are located. Our budget for prizes to be awarded to outstanding children and logistics etc for the exercise is N100,000.00.  You have been wonderful partners in this project of reducing the number of out-of-school children.  We remain very grateful.

New Book by President and Founder of PACAW, Inc

In April 2017 a new book, authored by the president of PACAW, Inc. was published in the United States of America by Hamilton Books, a member of Rowman & Littlefield Publishers. It is available in both paperback and ebook formats.

The book examines in depth and in a bold fashion the calamitous state of most of the nations of Sub-Saharan Africa secondary to chronic leadership failure.

Subtitle: Change In Sub-Saharan Africa Must Come From Within

Below is the link to the book's webpage on the publisher's website.

The book is also available at Amazon.com, BarnesandNoble.com, Walmart.com, bamm.com (books a million) and in some bookstores.

There is a strong correlation between infrastructure and development in any nation. Poor infrastructure has, unfortunately, been the hallmark of most of the nations of Sub-Saharan Africa. Very little attention has been paid to the building of the infrastructure of these nations after they attained independence from the European colonial masters. This neglect has contributed significantly to the poverty of these nations.

Most of the leaders of the nations of Sub-Saharan Africa would rather pillage the treasuries of their nations, fatten their overseas bank accounts and multiply their private aircrafts and other ephemeral possessions than take care of millions of their impoverished citizens.

No malfeasance by the leaders of Sub-Saharan Africa has resulted in, and continues to produce more irreparable damage to the essence of the “being” of the people of these nations than the collapse of their educational institutions at all levels. This calamity may be the greatest impediment to elevating many of these nations from the “bottom billion.” Why is that? Because the absence of quality education and the prominence of mis-education constitute permanent roadblocks to the maturation and attainment of the full potential of that unique gift of nature, the human brain.

Below is the link to the article titled: How Bright Is Africa's Future by Geoff Hill, distinguished author, journalist and former African Bureau Chief for The Washington Times.

The article is as touching and revealing ass much as its sadness. Sub-Saharan Africa certainly needs a new generation of selfless, visionary patriots. Hopefully we will find them among the children.

In 2015, one PACAW, Inc. teacher in the primary school was dismissed because of lack of truthfulness. During a long absence from work, at which time she continued to draw her pay, both she and her family failed to respond to multiple requests for reasons for her absence. These requests included evidence of hospitalization or any illness requiring frequent visits to a doctor. There was complete silence from her and her family.  Hence, she was terminated, and the position has been filled.

In the secondary school, two teachers left for jobs in other states, one in Lagos, the commercial capital of Nigeria and the other in Plateau state. They both performed well as PACAW, Inc. teachers and we wish them the very best in their future endeavors. Both positions were also filled. 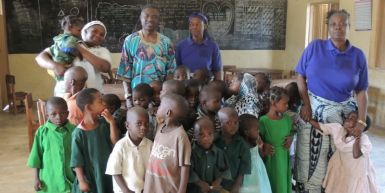 In January 2014, PACAW,Inc. employed eight new teachers for the three schools, (two primary schools and one secondary school) in the village in Kwara State Nigeria where we are currently operating. One more teacher was added to the secondary school staff in April 2014.